Movies You Haven’t Seen, But Should #1: ‘The Man from Earth’

I’d personally like to welcome you all to the first installment of my column “Movies You Haven’t Seen, But Should.” As an avid viewer of movies and films of all sorts, I believe there are some films that may not have the fame or following of many popular movies but are well worth a watch. This column is here to give you a quick peek (without spoilers), so that next time you’re at a loss for what to watch your recommendation is right here. So without further ado, let’s get started on our journey through time with this week’s choice: “The Man From Earth.”

While sitting alone on my back deck this summer, staring into the stars as I do much too often, I had what turned out to be a spectacular idea. Quickly, I turned to my laptop and pounded out a Google search for the “best philosophical movies.” Google auto-corrected my poor spelling and sent me on my way to a list of movies that fit the bill. While some of the titles were well-known and films that I had seen before, there were many I had never even heard of. The one that caught my eye almost immediately was a little known science-fiction movie from 2007 titled “The Man from Earth.” The screenplay is written by famed writer of the “Star Trek” series Jerome Bixby. Amazingly, Bixby began writing the screenplay in the early 1960s and didn’t finish the masterpiece until he was on his death bed in 1998.

Although “The Man from Earth” is listed as a sci-fi movie, it is most definitely not your typical film from the genre. There are no cheesy special effects, no aliens, and no unrealistic action. In fact, there is very little action, and I think the movie would be better classified as a “philosophical talkie.” 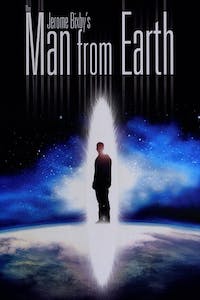 I know you are probably thinking, “No action? How boring is this movie?” But I can assure you, this movie is anything but. Though it is an overused cliche, “edge-of-your-seat” is a 100% accurate way to describe the effect the dialogue has on anyone who watches the film.

In short, the movie is about a professor, John Oldman (played by David Lee Smith), who reveals to his colleagues at an impromptu going away party that he is actually a Cro-Magnon who has miraculously survived for over 14,000 years. The best part about the movie is that almost every single question that just ran through your head while reading the last sentence will most likely be answered during the movie. Fortunately for us, John’s colleagues are from a wide variety of disciplines, giving us expert opinions on this revelation from biological, historical, anthropological, psychological, and religious perspectives.

Purely through conversation, the plot takes us on a journey from the start of early man until present day, but through the eyes of a singular being. On this journey we discover that John Oldman has played a significant part in the history of humanity and spent time with many influential figures such as Christopher Columbus, Van Gogh, and the Gautama Buddha himself.

The philosophical implications of the film are wildly entertaining and almost indigestible on a single watch. This isn’t a problem, though, due to the fact that you’re going to force your friends to watch it with you after you give it a go yourself. Be careful about how late you watch this movie, however, because there is a good chance thoughts might take the place of sleep, and you might even find yourself outside, staring at the stars, pondering your place on the orb we call Earth.

Comments powered by Disqus
Subscribe to our newsletters Tweets by cavalierdaily