How was your spring break? 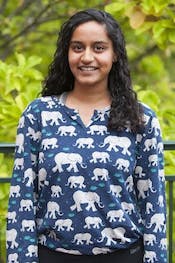 Vega's column runs biweekly Tuesdays. She can be reached at v.bharadwaj@cavalierdaily.com.

I don’t feel bad for having spent most of last week curled up with a book in my air-conditioned bedroom, blissfully ignoring the weather’s pleas to venture out into the uncannily summerlike NOVA temperatures. I only feel bad that the richness of my experience can’t easily be conveyed through a 30 second pitch on how my spring break went. I don’t want to feel pitied for having consciously chosen to lay low and recharge rather than cruise to a beach or volunteer abroad.

My spring break was characterized by spiritual growth and a dramatic shift in my perception. A professor had recently mentioned the term “stoicism” in one of my classes, and I was itching to spend my week finding out more about the topic. My research led me to a biography of the French Renaissance philosopher Michel de Montaigne, which answered a nagging question I’d had about how to apply mindfulness practice to Western culture despite the fast-paced reality of never having enough time to just sit around and meditate.

But how would I ever be able to convey all of these ideas to someone who questions only where I went or what I did over spring break? When asked about break, I feel almost obliged to rattle off an enthralling itinerary of escapades, as if a pleasant or satisfying experience can only manifest itself in an action-packed adventure. Why is it that courses of extraordinary events are perceived as more valuable than a person’s subjective experience?

Thumbing through boisterous Snapchat stories and fluorescent Instagram boxes of my friends’ tropical vacations made me feel happy they got to experience all these new and exciting crevices of the world. But it also made me wonder what was running through their heads behind their tanned faces and drunken laughter. What were some things they learned about themselves during their trip? Were they enjoying themselves as much as they’d expected to? Was there something about their travels that didn’t quite go according to plan, and how did they accommodate this?

People often talk about getting “bikini ready” for spring break as if showing off to the world their trim waist is the key to a fulfilling life experience. I would venture to say the obsession with looking picture perfect is not always problematic in itself, but is symptomatic of a bigger cultural issue — the notion that one’s existence only holds worth if it can be externally validated by other people.

I’m sure there are many people like me who didn’t leave the state of Virginia over spring break. Perhaps it wasn’t in their budget, perhaps they wanted to spend time with their family or perhaps they needed to get caught up on schoolwork. No matter the reason, I would encourage these people not to feel ashamed of their ‘uneventful’ breaks and to look instead at what they were able to gain from their experiences and proudly share this insight when asked the dreaded question.

My impromptu mindfulness research taught me a lot about how to control my emotions and not get caught up in the complexity of my conflicting cognitions. I learned meditating need not be confined to a ten-minute break between studying for midterms; meditations are a way of experiencing the world one instance at a time. Any experience can be made to feel worthwhile and meaningful if you allow yourself to think critically and deeply about it.

It is just as plausible to feel miserable with your toes planted in the sand as it is to feel contented while engulfed by the couch watching Netflix. Who’s to say one objective way of spending time is more valuable than the other?