The director of the NIAHD provided insight on the latest vaccine successes, the number of recent global COVID-19 cases and addressed vaccine skepticisms in the hour-long lecture

Dr. Anthony Fauci, director of the National Institute of Allergy and Infectious Diseases, spoke Wednesday on the latest developments of the coronavirus pandemic in the University Medical School’s last Medical Center Hour of the semester. This notable lecture marked this semester’s last weekly forum for the Medical Center Hour — which is put on by U.Va.’s Center for Health Humanities and Ethics. Fauci, who is also a member of the White House Coronavirus Task Force, touched on six main topics regarding the virus — epidemiology, virology, transmission, clinical manifestations, therapeutics and vaccines.

In his first point of discussion, epidemiology, Fauci noted that this is not a completely novel virus — referring to SARS-CoV from 2002 and Middle East Respiratory Syndrome from 2012, which were coronavirus strands that infected over 8,000 and 2,500 people across the globe, respectively. Despite phylogenetic familiarities with other coronaviruses — meaning the virus have similarities in evolutionary development — Fauci also notes that COVID-19 is the worst viral outbreak that the world has seen since the Spanish Flu in 1918, which resulted in the death of at least 50 million globally, including 675,000 people in the U.S.

“As of [Tuesday], there were 56 million cases and over 1.3 million deaths globally,” Fauci said. “Unfortunately for us in the United States, we are the country that was hit the hardest … with more than 11 million cases and now over 245,000 deaths.”

Reflecting back on the response of the United States, Fauci drew comparisons to the European Union. Due to a premature reopening of the economy, the U.S. was never able to reach a baseline of cases as was seen in the European Union. Through a variety of graphs, viewers could see a drastic minimization of workplace presence in Europe during the early months of the pandemic in addition to far less park, grocery and pharmacy store visits. The data indicated that parks and outdoor spaces in Italy and Spain decreased by 50 percent between March and April, while the U.S. only saw a 20 percent decrease. Around the same time, workplaces in the two European countries saw a 70 percent decrease, while the U.S. shut down by about 50 percent.

“I testified before the Congress a couple of months ago when we were at 40,000 [cases], and said that if we did not do something different and contain this … we would get to 100,000 cases a day,” Fauci said. “I was severely criticized by some members of the Congress for being hyperbolic.”

But as case numbers have continued to rise, Fauci’s prediction came true — since Nov. 8, the U.S. has registered over 100,000 new cases per day, according to the Centers for Disease Control and Prevention’s COVID-19 tracker. Now with a record-breaking number of cases — nearly 11.5 million cases — Fauci says the U.S. is in the process of a resurgence in cases as we head into the winter months.

Following these comparisons, Fauci moved on to discuss the transmission of the virus, which has led to the world-wide practices of mask wearing and social distancing. The six-foot distance, Fauci says, comes from the fact that respiratory droplets can spread six feet during conversations. Despite those initial findings, recent research has shown the aerosol nature of a portion of droplets, which can remain suspended in air for a long period of time and therefore pose a greater threat to virus spread.

“Right now, today … we're finding that innocent occurrences such as groups of friends and family meeting indoors because of the cold weather … [are] becoming a major source of asymptomatic spread to the group,” Fauci said.

Heading into the holidays, Fauci says it is up to families to make individual decisions that will protect their most vulnerable relatives and friends. The University is sending students home after the end of in-person classes Tuesday for an extended winter break — currently set to last until February. To help limit potential spread upon students’ return home, the University is providing testing to all students living in Charlottesville and Albemarle County prior to their departures. But students will have to remain vigilant once they arrive at home.

When it comes to preventing acquisition and transmission, the fundamentals are five-fold —  covering the nose and mouth, maintaining physical distances, avoiding congregated areas, being outdoors rather than indoors and frequent hand washing.

As much of the world knows at this point in the pandemic’s course, the severity of cases range anywhere from asymptomatic cases to death. This viral characteristic is one that not even Fauci has experienced.

“I've never seen anything like it,” Fauci said. “That is just so unprecedented to see a virus that can kill you and can cause severe morbidity and mortality, and yet so many people have absolutely no symptoms at all.”

For those that overcome the virus — even those just with minimal symptoms — Fauci noted that around 25 percent experience the persistence of symptoms, meaning they still experience bothersome effects for weeks or months following clearance from the virus, meaning a person can no longer transmit the virus to someone else. These symptoms often include fatigue, shortness of breath, temperature dysregulation and brain fog.

Now eight months after the U.S.’s national state of emergency declaration, there have been two drugs recommended by the National Institutes of Health for the treatment of COVID-19 — remdesivir and dexamethasone. Of the two, only remdesivir has received U.S. Food and Drug Administration approval. The most recent treatment that was given emergency-use authorization by the FDA Nov. 9 is monoclonal antibodies — antibodies produced from a clone of SARS-CoV-2 cell line consisting of identical antibody molecules. However, Fauci questions the long-term effectiveness of monoclonal antibodies.

“What is going to shake out, I can assure you, is that … monoclonal antibodies will obviously be good early on in the course of disease, and much less effective as we go later into the cause of disease,” Fauci said.

In regards to vaccines, those with major investments can be split into three platforms — nucleic acids, viral vectors and protein subunits.

Bioentech Pfizer and Moderna, in collaboration with the NIH vaccine research center, are utilizing the nucleic acid platform, called mRNA. In this platform, cells are ‘instructed’ to create proteins to fight and prevent disease.

In the viral vector platform, companies are mimicking a natural SARS-CoV-2 infection in hopes that the body will produce a strong immune response. This platform is being utilized by the pharmaceutical company AstraZeneca — which is partnering from the University of Oxford — and the Johnson & Johnson subsidiary Jannsen and Merck.

Finally, Novavax and Sanofi are utilizing the protein subunit platform to produce antigen molecules from microbes.

According to Fauci, five of these vaccines are in phase three trials, and results are in for Pfizer and Moderna. On Tuesday, Pfizer announced their trial had 95 percent efficacy, or effectiveness, and Monday, Moderna announced a 94.5 percent efficacy. Now that a high efficacy has been met, the trial data must be reviewed by the Vaccines and Related Biological Products Advisory Committee before they can receive an Emergency Use Authorization by the FDA. Even with severe cases, Fauci says both trials showed a very clear difference in severe COVID-19 cases between the vaccine versus placebo groups. Specifically, Moderna saw zero severe cases in their treatment group and 11 in the placebo group.

Once a vaccine is out, the next step is the breakdown and triage of vaccine distribution. Though the current breakdown announced by the National Academy of Medicine is not set — the final decision will ultimately be made by the CDC — high-risk healthcare workers, first responders and old age groups are slated to come first. Following this will be those in critical risk, including people in essential industries such as teachers.

Additionally, society will see another dilemma following vaccine distribution — community uptake. According to a recent poll, only 50 percent of Americans plan to get the vaccine due to skepticisms over quick manufacturing and a lack of confidence in the long-term safety of the vaccine.

“This is something that we must address by outreach in the community, by individuals that the community actually trusts,” Fauci said. “We would not want to have an efficacious vaccine, that at the population level is not effective because of a lack of uptake.”

Fauci also mentions that society must not let their guard down once a vaccine is distributed, as it will take a long time for the population to reach herd immunity, which he estimates requires more than a 75 to 80 percent vaccinated population.

After the presentation portion of the talk, Fauci fielded questions from the audience, which were moderated by Marcia Day Childress from U.Va.’s Center for Health Humanities and Ethics. When asked how to convince people to get the vaccine, Fauci says that in terms of skepticism due to the rushed nature of its creation, people need to understand that the speed is due to extraordinary technology, enormous investments and independence and transparency of the decisions by groups like the Data and Safety Monitoring Board, FDA and the Vaccine and Related Biological Products Advisory Committee.

“I can tell you, as a colleague of all of us here on this boot, this has been an independent decision,” Fauci said. “It has been done in the classic way that decisions are made about vaccine safety and efficacy.”

In the final minutes of his lecture, Fauci took the time to look at the past in order to guide our future, referencing a recent paper he co-published called “Emerging Pandemic Diseases: How We Got to COVID-19.” Fauci notes that there are a variety of factors — including the encroachment on the environment and human-animal interface — that have been major contributors to the spread of coronaviruses, as increased interactions between species give these viruses time to mutate then infect humans.

“The bottom line … is similar to something that we wrote years ago — outbreaks and pandemics have been with us forever, even prior to recorded history,” Fauci said. “The critical issue is that we cannot prevent the emergence of a new microbe. But what we can do is by our preparedness, prevent that emergence from becoming a pandemic process. And that's going to be the challenge for the future as we learn lessons from the past, and we make sure we don't lose corporate memory of what we're going through right now.”

Though more than 90 percent of faculty are vaccinated, many  have children who cannot be as  vaccines have not yet been approved for those under the age of 12.

Few masks seen at football games, except on members of the Cavalier Marching Band

By Zach Rosenthal | 5 days ago 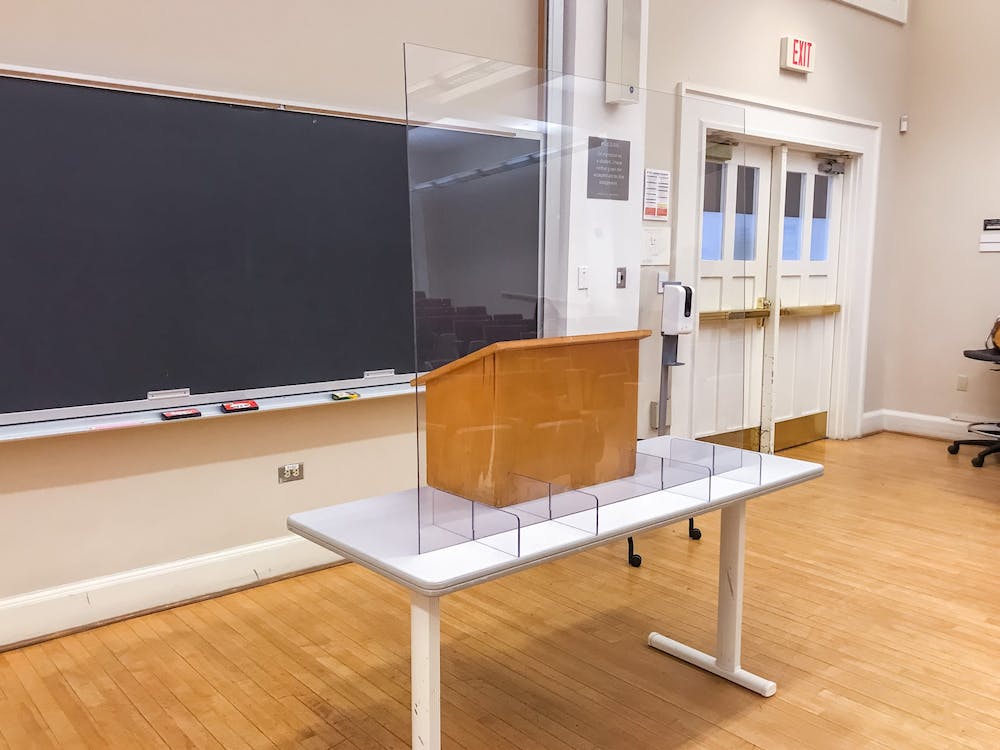 By Sydney Herzog | 5 days ago

A CDC study looking at transmission prevention strategies in schools concluded that masks and increased ventilation were the most effective at minimizing the spread of COVID-19, while barriers between students proved to be the least effective method tested.