An Interview with Three Real Students

It’s just so hard to find somebody to hate these days. All of our politicians are doing such a good job handling vaccine rollout so nobody has to drive three hours to like Danville or something, Greek life students have consistently followed all of the guidelines like the upstanding citizens they are — did you know they do community service once a month too? —  midterm week actually lasted a week for the first time in the University’s history, we had the best March Madness run that I can remember — I don’t watch sports — and every single person got into the major they wanted this spring. Regardless, the student body in the last few months has unfairly thrown all their frustrations at our hard-working admin, who have made the curve flatter than a rum and coke at Bilt through their excellent, scientifically informed choices.

We here at the Humor section condemn these attacks, especially personal ones that, for example, say that Jim Ryan looks like a deflated basketball, or that Dean Allen Groves dresses like an old-timey train conductor or that Liz Magill — wait what does she do again?

Thankfully, I was able to track down three of the only reasonable people left on Grounds for interviews. I present to you here the unedited transcript.

Eshaan: So tell us your name and a little bit about yourself!

RJ: Oh I’m uh, Rim Jyan — Rim Jyan, yeah. I’m an Econ major who likes to play spikeball and watch all the Tok-Tiks in my free time. Those Tok-Tiks are crazy haha don’t you love Bodos too?

GR: Hey guys I’m Gallen Roves, a pre-law student who’s pretty involved in Greek Life and I’m also thinking about joining YAF because free speech is pretty much the only thing I ever seem to speak up about. I also like the Tok-Tiks in my free time and play frisbee all the time since I’m so young and healthy and have dark hair.

ML: I’m Mizz LcGill — oh, and to answer your question, I think the provost does like a whole bunch of different things like class registration, but I hear she’s really smart! I’m an English major who likes eating insomnia cookies and watching Netflix and other normal things like that.

E: Oh … I guess none of you guys want to turn your camera on, all good. Anyways, admin has come under fire a lot recently, especially for that spike after bid day. What are yall’s thoughts on that?

RJ: I was so mad at first! But like, after all those maps that flashed by really quickly and that one super-stiff doctor that came to the town hall spoke, I realized there’s no way it can just be Greek life’s fault. You know, I heard that even a few students sitting inside without masks could have caused it — yes that’s what I’m going with. Besides, did you guys not hear the President say how very very sorry he was? That poor guy, I mean he lost the most out of anyone really.

GR: It’s ridiculous. I can’t think of a single group in America that receives more unjustified hate than frat boys. Plus I know my guys would never do something like that — I mean the kind of person that joins Greek life is really good at listening to authority figures, that’s why we can get them to totally dehumanize themselves during rush and pay thousands of dollars per semester to live in grimy houses.

ML: Two whole questions? Nobody has ever talked to me this much! But yeah like Rim said, I don’t think we can blame any one group for this spike, especially if blaming that group would result in sanctions and rethinking our school policies, because that would just be a whole lot of paperwork for me — them.

E: Um ... yeah okay. So next question — Is there anything you want to see improvement in going forward from admin?

RJ: Man, I love all that community building stuff. Like runs and juggling contests — I mean you have to be a pretty cool person to organize all that right? I think students like me really want more Zoom meetings, reading groups, virtual fireside chats and … what does he call it? Building bridges? And some more speeches as well, I mean the camera can’t seem to get enough of our President.

GR: Like I said, protecting free speech is really important, but slander is not covered by free speech. I’d like to see more action taken against people that insult Greek life or people associated with orgs like YAF. I mean the amount of people calling that one StudCo rep ugly and racist just because he refused to condemn racism was really disappointing as a U.Va. student. And those signs on the Lawn are really scaring the children. I think U.Va. needs to take a harsher stance on signs.

ML: Oh my turn again? Wow, well I think it would be really cool for the provost in particular to —

** At this point in the interview, Rim Jyan accidentally turned his camera on, revealing himself to be an old, balding white man, although the camera quality was too fuzzy, and his features were too generic for me to place my finger on who he actually was. In a panic, Rim quickly left our Zoom call, and shortly after, Mizz and Gallen left too. I was left staring at a black screen, thinking about how sad it was that, since all my friends are computer science majors, these weren’t even the strangest people I’ve met. 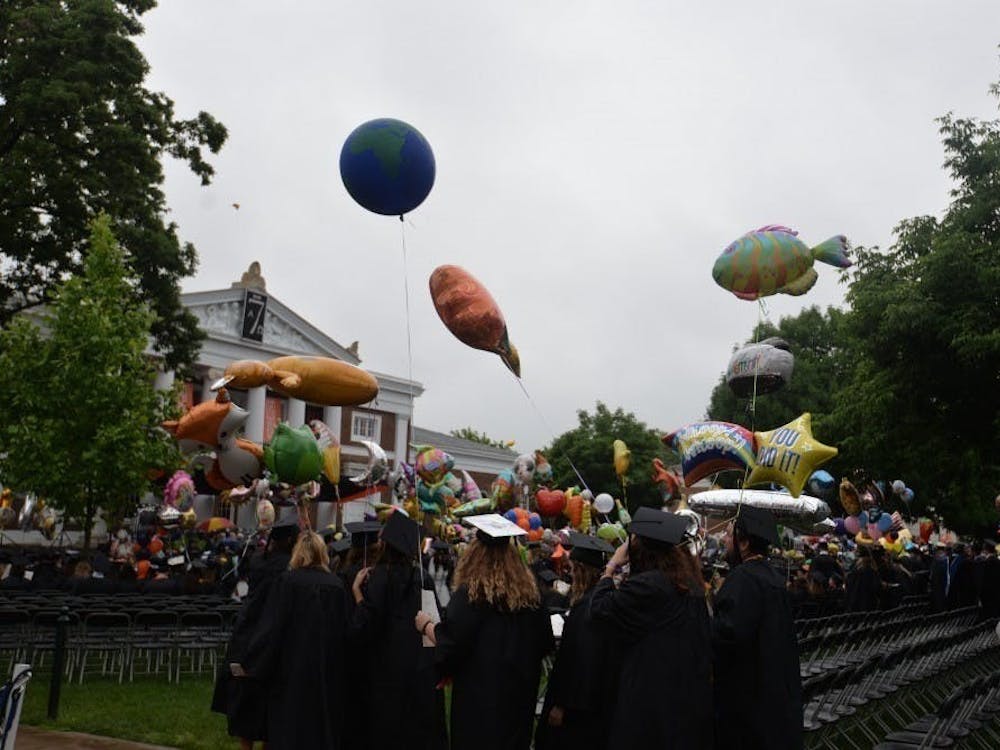 Congrats 2021 — go drink a borg and try not to let go of your balloon!