Is anyone surprised that Thomas Jefferson loved spending his Saturday afternoons sitting on the porch of Trump, ironically purchasing “Make America Great Again” hats and accidentally buying the wine fortified with brandy? Though I guess for time and history’s sake Jefferson was simply ‘Making America Great,’ we should find comfort in knowing that our founder would have Instagrammed the scenic vineyards as we do today. Rumor has it Jefferson’s wine bill for his first term as president was about $10,000 — or nearly $190,000 in today's dollars. Rest easy knowing you’ll probably never be able to spend that much on 7Day’s own Gallo Family bottles.

A gentleman and a scholar, Thomas Jefferson allegedly had just as much of a thing for bones as he did for wine. So much so, in fact, that he had a species named after him when someone mailed him some fossils they had discovered in a cave in Virginia. Though to be honest, I probably would have liked some chocolate or extremely expensive wine instead of a set of bones, Jefferson’s taste apparently differed from mine. Turns out, this “dumb” (my quotes) gift was an undiscovered species and was thus named after the president himself. Megalonyx jeffersonii was a giant ground sloth.

Was there anything Thomas Jefferson couldn’t do? An expert at digging, wine and apparently also music, the former president was a talented violin player. So into classical music, Jefferson evidently couldn’t handle emerging pop culture — by 1778 he complained about the new style music in America as being in a “state of deplorable barbarism.” This being considered, I’m guessing Jefferson probably wouldn’t have loved being asked to play acoustic renditions of ’90s songs to a crowd of definitely over-21s outside at Crozet. But, this could be different after getting a few Fresh Zens in him.

4. Jefferson wrote about 19,000 letters during his lifetime

Seriously, think about this. This is some “I wrote you every day for 365 days” type of dedication, but for about 52.05 years. If I were the mom from “The Notebook,” I would have probably given in and showed Rachel McAdams all those letters. But, one must wonder: whom was Jefferson writing to? What could he possibly have to say in 19,000 different letters? Did anyone write him back? How much did postage cost? Do presidents pay for postage? Do you think he got his rent check in to CBS Rentals on time?

5. Jefferson has his own recipe for vanilla ice cream in the Library of Congress

You mean my 4 a.m. Cook Out runs can be rationalized knowing that they’re definitely using the same recipe so lovingly curated by our third president? After returning from France, Jefferson was so taken by all things French (see: wine) that he just had to have this recipe thrown into the White House cooking rotation. Of all things to bring back from France, I’m curious as to why vanilla ice cream was his culinary choice, but I can’t complain as at least 58 percent of my diet consists of ice cream and about 78 percent of my time is spent thinking about it. Though this is probably pretty unhealthy, I feel a little better knowing Jefferson is out there somewhere thinking about the same thing.

6. Jefferson served French fries at a White House dinner in 1802

And here you were thinking it was just vanilla ice cream he carried across the pond. The other very French, very authentic cuisine Jefferson just couldn’t live without: “potatoes served in a French manner.” What was I saying about Cook Out? This gives a whole new meaning to the term “freedom fries” — because honestly, who wouldn’t feel free after subsisting on a diet of wine, French fries and vanilla ice cream for their entire public and professional life? Then again, I can’t be certain this is all he ate, but one can infer by my various Google searches of “Thomas Jefferson diet” that it couldn’t have been all fun and vegetables. To quote the great homie himself: “We never repent of having eaten too little.”

A most interesting choice of pet — for someone so obsessed with giant dinosaur bones and land sloths, a tiny mockingbird is not quite what I’d expect as Jefferson’s companion of choice. Regardless, it has been reported that TJ loved their singing and often kept at least four at a time in his home. Stay with me here: I think these mockingbirds would have made killer backup singers for Jefferson’s Crozet cover band. Apparently, his favorite bird was named Dick. Short for Richard, I’m inferring, as Richard seems a lot more regal than Dick. I hope they were fed more than French fries and ice cream.

8. Jefferson was an awful public speaker

Despite Jefferson’s demonstrated eloquence (see: Declaration of Independence, among other important documents), he was reportedly an awful public speaker — so much so that he refused to give the State of the Union out loud, instead mailing the lengthy report to Congress. This is rather unfortunate, as I assume a pretty lasting GIF could’ve been created from a president shaking at the podium. But, I relate, as the last time I gave a presentation out loud I combined the words “cool” and “sick” into the word “swick.” Almost as fetch as the word “grool,” I did actually have an academic reason for saying the words “cool” and “sick” out loud in the first place, and no, I did not recover very nicely. Swick, right?

9. Thomas Jefferson and John Adams died on the same day

On the 50th anniversary of Thomas Jefferson declaring that we should hold all truths to be self-evident and all men should be created equal, he sadly gave up his life, liberty and pursuit of happiness. Both Jefferson and John Adams passed away on July 4th, 1826 — a strange and very patriotic coincidence. Even weirder: Adams’ last words were reportedly “Thomas Jefferson still survives” — a fact wrong by only five hours. I may forever wonder why Thomas Jefferson was on Adams’ mind as he passed away, but I can safely, I think, assume that he was just getting hype for the upcoming basketball season.

It’s no secret that Jefferson was an impressive writer and well-read man. He wrote the Declaration of Independence, which means he indirectly inspired the iconic American hero series, “National Treasure.” Where would Nicolas Cage be without the ingenious musings of our third president? But, continuing, where would Cage’s character Ben Gates be if he had counted to 100 instead of just stealing the Declaration of Independence? Would the ending of what is arguably America’s favorite movie have ever been the same? Would any of us here have been the same? Cage aside, next time you feel you’ve been wronged by a grade or a poorly timed group meeting, heed Jefferson’s advice and count to 100 before you say anything rash.

Getting over my fear of U.Va. tours

Now, as I look at the prospective students touring Grounds and conjuring up scenarios about the things we actually do here, I won’t be scared of seeing them anymore. 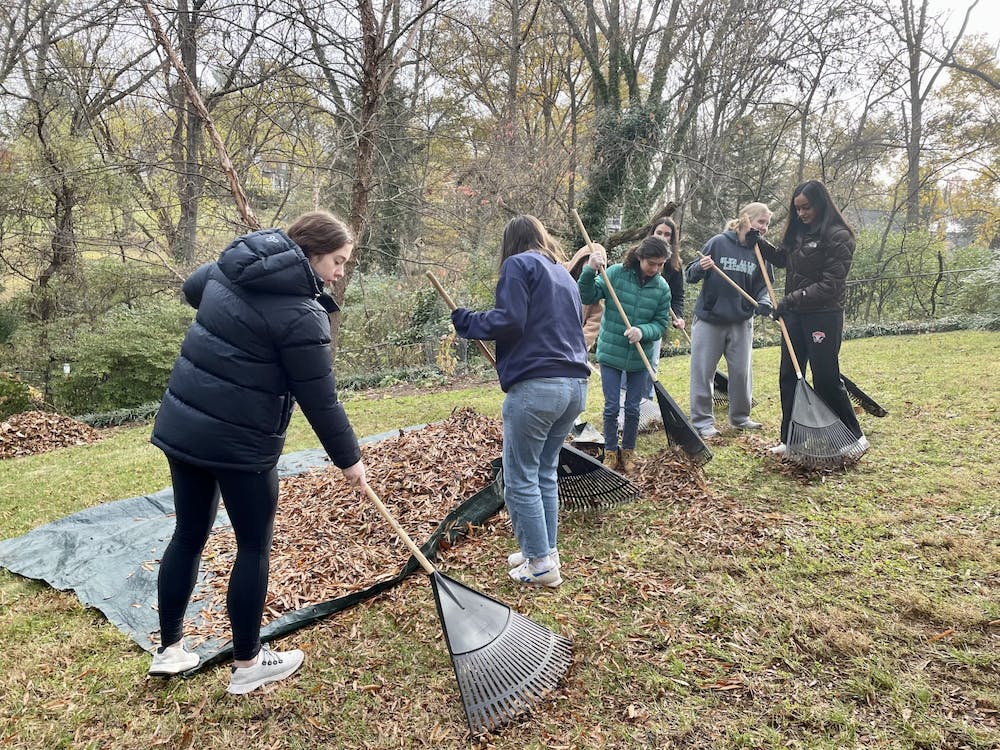 By Acacia McCabe | 3 days ago

On the morning of the event, students and community members alike met up with their pre-coordinated drivers, and dispersed across the Charlottesville area to a total of 113 lawns throughout the four hour window. 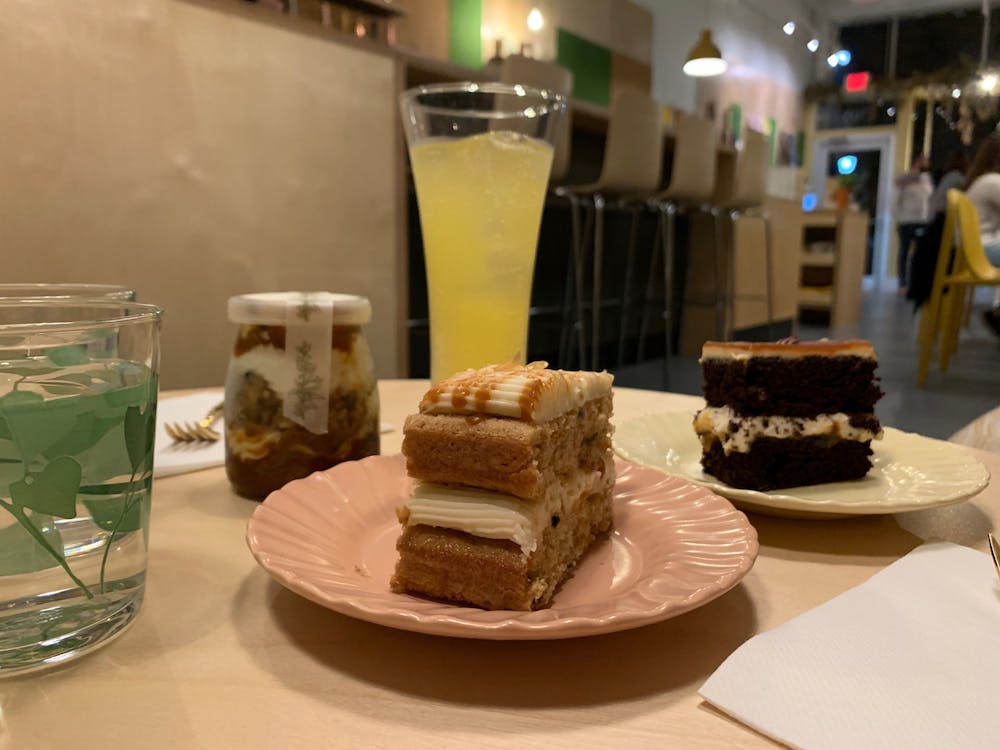 Not only do they offer their signature cakes and sparkling wines, but they also sell artful goods, such as ceramics, event cards and extra party goods.