All is not lost

One of the hallmarks of my time here at Virginia has been a general sense of jadedness when it comes to our football program. A classmate told me yesterday that he actually enjoys the fact that Virginia is not known as a powerhouse program because it forces us to find bonds and an identity outside of football. It’s an interesting point, but the fact of the matter is that we’re not particularly good at football, and for hardcore sports fans, that can be tough to swallow.

Saturday’s blowout loss to Ball State certainly didn’t help. It always stings to turn on ESPN and see that your team is on Upset Watch, being tipped to lose a close one to a MAC opponent. The sting gets a little worse when the dust settles and you realize that said MAC opponent actually beat your team by three touchdowns.

The worst part is how discombobulated the team has looked the last few weeks. A week after crushing VMI 49-0 — I know, not a good measuring stick — the Cavaliers lost to ACC foe Pittsburgh 14-3. The defense was not to blame, holding the Panthers to just eight yards rushing and 199 in total, but you don’t win games when your offense only gains 188 yards and fails to reach the end zone.

The offense improved Saturday, gaining 236 yards on the ground and 459 overall. But it was all for naught as Cardinals quarterback Keith Wenning dissected the Virginia defense for 346 yards and two scores while tailback Jahwan Edwards racked up 155 rushing yards of his own. The Cavaliers just can’t put it all together.

Virginia coach Mike London, possibly coaching for his job at this point, has to be wondering what he can do to help his team find an identity and make a push to salvage a season that could easily slip away without some adjustments.

With all of that in mind, it would be really easy for Virginia fans to pack it in and give up on the season at this point. Believe me, I know; I did it last year at about this time. After the Cavaliers lost to Georgia Tech early last season, I wrote in this very space that I thought there was a realistic possibility Virginia wouldn’t win another game all season. I’m proclaiming myself the king of managed expectations when it comes to U.Va. football, so believe me, I won’t blame you if you choose to take this route.

But for those of you who want to hold on to a sliver of a dream for a while longer, I’m here to tell you that this year could be different. All hope is not lost.

The road to 6-6 and bowl eligibility is steep, and it has little or no margin for error, but it is an attainable goal if the ball bounces the right way.

Virginia is not beating Clemson or Miami this year. Book it. The Tigers and Hurricanes are both highly ranked national powers, and they just have too much talent for the Cavaliers.

That leaves five remaining games, with four wins necessary to reach postseason play. Like I said, the margin for error is razor-thin. But can the Cavaliers do it? Let’s go with a resounding “maybe.”

Next week’s opponent, Maryland, came into Saturday ranked in the top 25 largely by virtue of being an undefeated ACC team. Then Florida State decided to wax the Terrapins 63-0. Maryland’s confidence might have taken an even worse bruising Saturday than Virginia’s did. And though the Terrapins have some talent, including sophomore receiver Stefon Diggs — who returned a kickoff 100 yards for a touchdown against Virginia last season — weird stuff happens in rivalry games, so I wouldn’t be surprised if the Cavaliers pull off an upset.

The next two opponents are Duke and Georgia Tech, both of whom sit at 3-2. Both teams have explosive but wildly different offenses; the Blue Devils rely on Blue Devils quarterback Brandon Connette’s aerial attack and the Yellow Jackets run for 300 yards per contest. They will each make tough opponents, but Virginia did beat each the last time it played in Scott Stadium.

After Clemson comes North Carolina, who is having a rough year at 1-4. Tar Heel signal-caller Bryn Renner is throwing for a little more than 200 yards per game, and the Tar Heels’ 100 rushing yards per game rank 113th in the country. If Virginia can get its offense going in that game, it can win.

Then, after Miami, Virginia closes the season with archrivals Virginia Tech. The Hokies sit at 5-1, but I find that record to be very misleading. The combined record of the five teams Tech has defeated is 12-14, and that’s including 4-1 East Carolina. Senior quarterback Logan Thomas is underperforming this season, and if there’s any year for Virginia to steal one from Frank Beamer, 2013 could be that year.

Will all of this happen? It’s far from a certainty. It’s probably just as likely that the Cavaliers limp to another 4-8 finish as it is that they take care of business and finish the season with a bowl appearance.

But if we allow ourselves to get jaded, if we stop going to the games altogether, who’ll be there to give the Cavalier players the support they need to persist when things are falling apart?

And who’ll be there to celebrate with those players if things start going right? 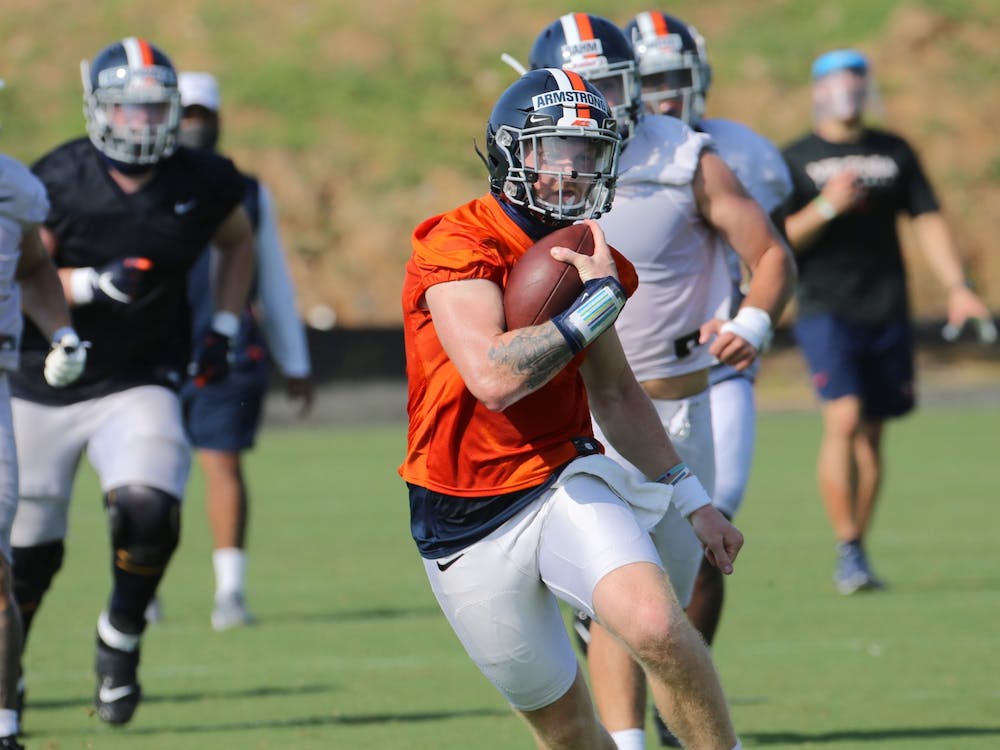 By Hannah Young | 11 hours ago

Despite the newfound pressure of being the Cavaliers’ leader in a global pandemic filled with uncertainty, Armstrong is confident and excited about the highly anticipated season to come. By Kushal Patel | 11 hours ago

The Cavaliers (0-0, 0-0 ACC) will open their season with a new face under center in sophomore quarterback Brennan Armstrong, who spent two years under the tutelage of former All-ACC quarterback Bryce Perkins.