West Main Street, the avenue that connects the University to the Downtown Mall, has undergone rapid development in recent years, with an influx of luxury student housing, hotels and dining establishments transposing themselves on top of one of Charlottesville’s most historic corridors.

In 2014, the Flats at West Village, a 622-bedroom luxury apartment complex, opened its doors, and was quickly followed by two similar projects, Lark on Main (formerly Uncommon) in 2016, and The Standard in 2018. In addition, a Residence Inn by Marriott Hotel opened in 2016 and the Draftsman Hotel was completed in 2018, both along West Main.

The City of Charlottesville has plans of its own for redevelopment on West Main Street. In 2017, the city approved a $31 million plan for a new streetscape development project, with plans to construct new sidewalks, light fixtures and bike lanes, among other modern design alterations.

While some see these changes to be an aesthetic upgrade to what was once there just a decade ago, others are concerned that the development is worsening the affordable housing crisis that has plagued Charlottesville for years, and could possibly engender negative consequences such as gentrification, which occurs when lower-income residents are displaced by upper and middle class tenants when they can no longer afford their neighborhood’s increased costs of living.

Lower-income Charlottesville residents pay a disproportionately large percentage of their earnings on housing in the area already, and the city needs roughly 3,300 affordable housing units to meet current unmet demand, according to a 2018 report by Partners for Economic Solutions.

To some, the city is caught in an untenable situation. While attempting to develop itself into a trendy, contemporary “urban neighborhood,” it runs the risk of pricing out existing residents, exacerbating the housing affordability crisis and stripping away the city’s diversity.

Laura Goldblatt, a postdoctoral fellow in the global studies department who also works with the Charlottesville Low Income Housing Coalition, said the University acts as a driver of low-income housing instability in the area.

The University is exempt from virtually all property taxes, and pays just small service fees on several smaller properties. Goldblatt said this is lost revenue for the area that the University could be paying to offset the ways in which it affects the housing market. She suggested a pilot-program payment in-lieu of taxes through which the University could assess its land, find out what they would be paying in taxes, and donate that amount to the City every year for its affordable housing.

In addition, Goldblatt said that because the school has insufficient on-Grounds housing for all of the students at the University, it causes the private market to have to step in to fill that gap.

In an email, Deputy University Spokesperson Wesley Hester noted the University plays a positive economic role in the Charlottesville community.

“Through its local spending, as well as direct and indirect support of jobs, the presence of U.Va. stabilizes and strengthens the local and statewide tax base,” Hester said. “U.Va. is an integral part of the state’s economy, generating government revenue, jobs, and spending.”

Hester provided an information sheet that indicated that the University made a $42,321 payment in lieu of taxes to the City of Charlottesville in FY 2017. However, this amount is far less than the amount that the University would be paying if it payed normal property taxes, which would be about $4.5 million according to some estimates.

The effect of University students and new off-Grounds housing complexes

Some say that University students are equally culpable in driving up housing costs in the area. Upperclassmen at the the University tend to start moving off-Grounds after their first year –– a 2016 consultant’s report to the Board of Visitors noted that 43 percent of second-year, 14 percent of third-year and 8 percent of fourth-year students decided to remain on-Grounds for their studies.

Hester said the University has plans to construct at least 600 on-Grounds beds before the fall of 2022, 300 of which will be accounted for in the current construction of an upperclassmen housing complex on Brandon Avenue.

Last school year, fourth-year College student Brian Cameron and two other students compiled a report detailing the negative effects that West Main Street’s private student housing complexes have on the surrounding community — a phenomenon they refer to as “studentification”.

Cameron said the University has seen a rapid increase in enrollment in the past few decades, but without a commensurate increase in the number of beds — allowing the private market to swoop in to meet this demand. Over the past 25 years, the University has only added 700 beds while enrollment has increased by about 4,700, meaning that 85 percent of this growth has been adding people to the private housing market.

“Developers see students as a captive market, and accordingly, price their developments at whatever students are going to pay,” Cameron said. “You go on these apartment’s websites, they are advertised to and designed exclusively for students, like this is the market that they are explicitly trying to target, and not … the 3,300 people who are in need of more affordable housing in Charlottesville.”

Goldblatt sees how the construction of these apartments could be a concern for the community as a whole as property values rise.

“A lot of people who are homeowners in the area cannot afford the increased taxes that come with the heightened property values, and so they end up being pushed out of the communities that they’ve lived in for a really long time,” Goldblatt said.

Brandon Collins, lead organizer of the Charlottesville Public Housing Association of Residents, also noted how the construction of these apartments on West Main Street could introduce negative consequences for the surrounding community.

“The cost of this student housing and housing for others is going up and up and up, and so affordability for others in the private market is also going up, which has the double impact of people who are succeeding in public housing and thriving have nowhere to go,” Collins said. “What that does is stagnate our waiting list for public housing.”

The effects of this development on less affluent residents of Charlottesville are often more than material, Collins added.

“I think that with these huge, huge buildings, the impact is felt by the residents in an extremely psychological way … they look up, they see these things built for everyone but them, whereas, you know, 50 years of public housing at Westhaven hasn’t seen any renovation and redevelopment ever,” Collins said.

Westhaven, the public housing site that was constructed to relocate residents displaced by the destruction of Vinegar Hill in the 1960s, is situated closeby to The Standard apartments.

The City of Charlottesville is aware of the private development that has been occurring along West Main Street for the past few years. However, Alexander Ikefuna, the director of Charlottesville Neighborhood Development Services, said that he does not consider the recent developments on West Main to be gentrification, as so far, they largely have not been agents of physical displacement. For example, Lark on Main was built on top of what once was a vacant lot and a defunct post office, and The Standard took the place of an aging office plaza.

However, physical displacement and relocation are not the only ways in which gentrification occurs. Construction of luxury apartments and City spending projects on streetscape redevelopment may make the entire area more expensive. When property is reassessed in the surrounding areas, property valuations and taxes could increase, in turn displacing people with lower incomes and allowing higher income residents to move in.

Ikefuna is aware of the spillover-type effect that these new luxury apartments could have on increasing property valuations in the area. However, he said that the City has several programs with the goal of curbing these effects, including a tax abatement program called Real Estate Tax Relief. This program allows residents who are 65 years and older or permanently disabled who are making a yearly income of $50,000 or less and possess a net worth of $125,000 or less to qualify for real estate tax relief.

The City has several other measures designed to curb the negative side effects of this new development. One program, the Charlottesville Affordable Housing Fund, requires a developer who applies for a special use permit to increase the number of units in their project to either construct a certain number of affordable housing units in the development or elsewhere in the City, or make a large cash contribution to the fund itself. The money in the fund is subsequently used by the city to fund affordable housing projects.

Essentially all of the developers of the West Main Street apartments — like Lark on Main and The Standard — have opted to make contributions to the fund, rather than construct affordable housing units. Uncommon and The Standard contributed $331,450 and $664,776, respectively.

This has led some in the community to criticize the program for not going far enough to encourage the construction of more affordable housing units in the area, citing that the money in the fund is no replacement for actual units.  According to the report provided by Ikefuna, 19 affordable dwelling units had been constructed by mid-March 2018.

Collins believed that these programs are still insufficient in meeting the City’s housing needs.

“They are tools that could be greatly expanded ...those are helpful tools, they’re not enough. A lot more could be done in terms of tax abatement to protect neighborhoods and the Affordable Housing Fund is growing, we’d love to see a greater City contribution to that fund,” he said. The City is currently contributing $3.4 million.

This article previously misstated criteria for the tax abatement program Real Estate Tax Relief and figures for the City’s current contribution to the Charlottesville Affordable Housing Fund. The criteria and figures have been updated. 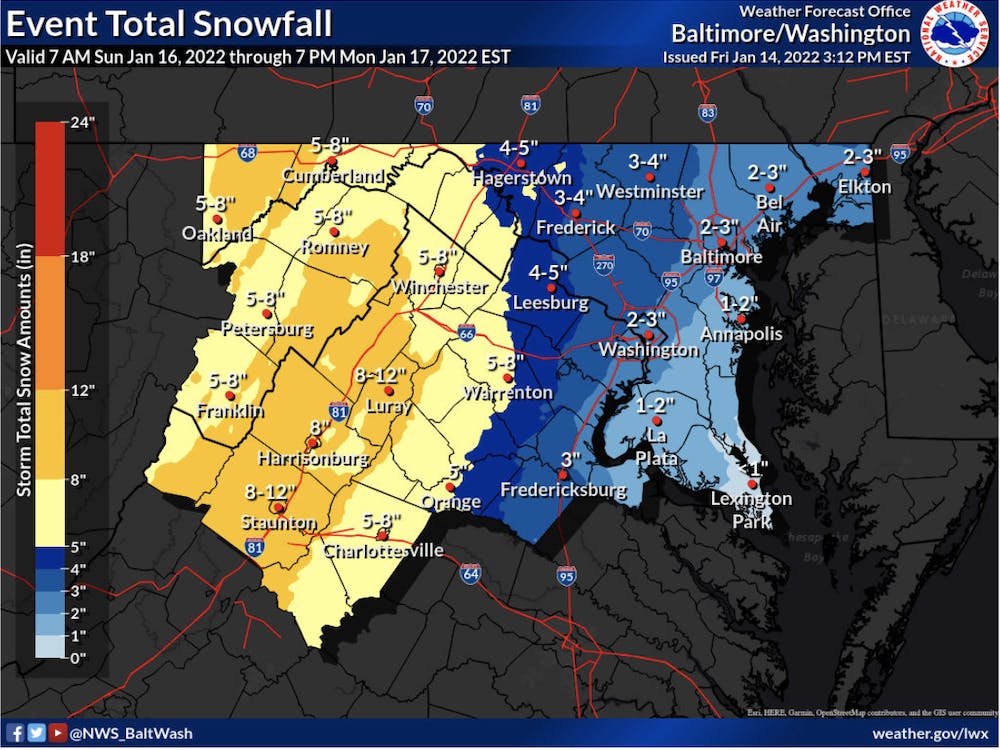 A Winter Storm Watch has been issued for Charlottesville from Sunday afternoon to Monday morning, with accumulations of 5 to 8 inches of snow expected. 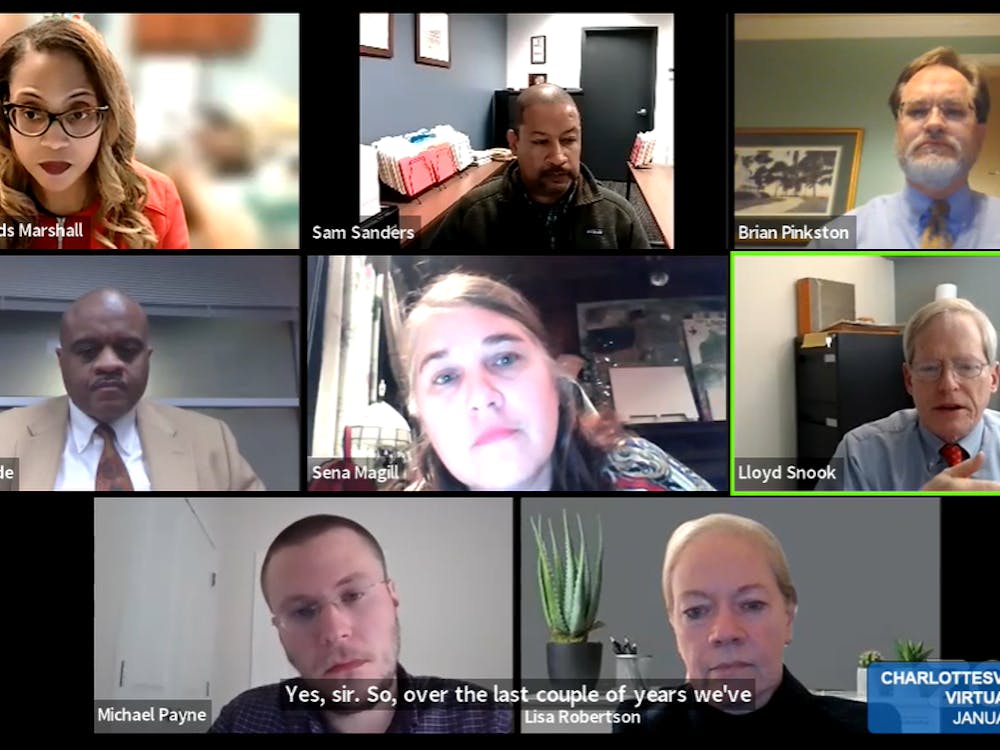 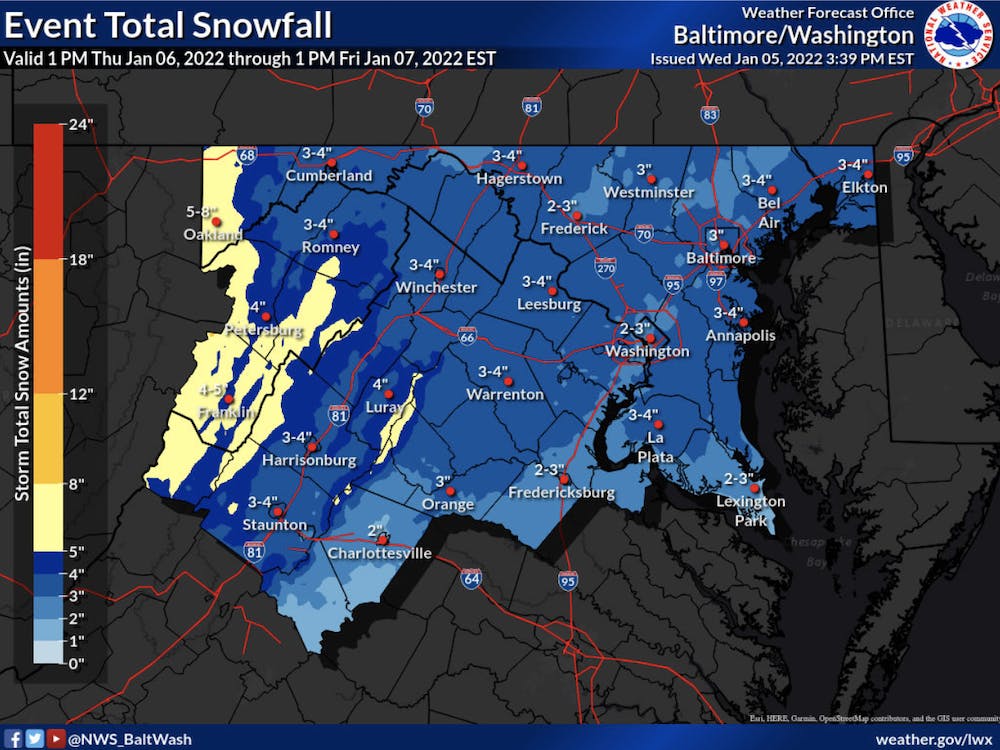 Second snowfall of the week predicted to hit Charlottesville Thursday

The National Weather Service forecasts a reasonable worst-case scenario — which it describes as having a 1-in-10 chance of occurring — as 4.5 inches in Charlottesville.