A look at in-person learning during COVID-19

For many in the University community, Tuesday, Sept. 8 was a pivotal date. Since the University’s announcement Aug. 4 that in-person classes would begin in some capacity on that day, students, faculty and staff alike have been waiting with bated breath to begin a semester of classes unlike any in recent memory. With one week of in-person class now complete, students reflected on what, for many, had been their first time in a classroom in six months.

For fourth-year College student Cora Wack, the experience has been refreshing. Wack attended her pre-advanced Chinese class this past week, which was held in Wilson Hall 214.

“This was one of my only in-person classes, so I was really looking forward to going because Zoom fatigue is a real thing,” Wack said. “I really liked being back in the classroom and seeing people I hadn’t seen in so long or had just seen on Zoom.”

As all in-person classes also provide students the option of attending online, Wack’s Chinese class was made up of both in-person attendees and students who chose to join in via Zoom.

“I think we have … 16 [people] total in our class and five people on Zoom,” Wack said. “Our teacher projected the Zoom people onto the screen, and we could hear them … She’d call on them, and then she’d call on the people in the classroom ... In the classroom it was about 10 people, and the spacing was pretty good.”

Though the possibility of social interaction with classmates is certainly limited under the new COVID-19 guidelines, Wack said she was still grateful for the opportunity to chat and interact with her professor and classmates, even at a distance.

“[Something] I kind of forgot about was walking out after class and talking to people on the way out,” Wack said. “I hadn’t realized that that was something I missed. But just walking out, talking about what our next assignment was or what we’d done over the summer … that was something that I really valued.”

“It’s a 20-person class, and they’re trying to keep it under that 15-person limit,” Huff said “So we got split into A and B day[s] … Everyone had on their masks … they had hand sanitizer stations everywhere in there, the little gym wipes, stuff like that. A lot of the [first day] ended up being a demonstration of how to properly clean the stuff and making sure you’re wiping down things before and after you use it and trying to distance yourself in the gym.”

Like Wack’s class, Huff’s weight training class has also undergone structural changes under COVID-19 guidelines, such as mandatory universal masking and sanitizing workout machines before and after use.

“We’re supposed to have class Monday, Wednesday [and] Friday, and so I go on Mondays, the other group goes on Wednesdays, and then we alternate Fridays so that we’re coming into contact with as few people as possible,” Huff said. “[Our coach is] letting us do home workouts or anything like that, so [it’s the] Honor Code system for making sure you’re still doing your stuff and creating a routine.”

“It’s a huge room — the biggest room they have — and when you walk in, you have to sanitize your hands at the beginning, and they wipe down all of the chairs and the desks …  so there’s stations to do that before you sit down,” Cherry said. “Then they have little stickers on the ground where the desks go … All the desks are six feet apart, and they’re sanitized after classes.”

Due to the hybrid learning model in place for her classes, with about 15 students attending in person and another 15 on Zoom, Cherry said that the classroom is set up quite differently than normal.

“The setup … is so technologically involved,” Cherry said. “There’s monitors everywhere because the desks are so spaced out that we can’t really see the front of the room. The PowerPoints are visible from every point of the room, which is really nice … And there’s plexiglass at the front of the room so that the professors can talk without their masks if they need to, but all of my professors have worn masks the entire time anyways.”

Despite describing the hybrid learning model as effective in many ways, Cherry said that it has, at moments, raised logistical issues in the classroom.

“We’re doing student presentations in one of my classes, so with the hybrid version, it’s a little odd because half the class is on Zoom and half is in person usually,” Cherry said. “So there’s feedback issues, and we have to use microphones. I think sharing in class and having discussions is much more strained, because all we’re doing is listening now.”

Still, according to Cherry, the professors’ flexibility and openness to student feedback has made her experience of the hybrid model a positive one thus far.

“I appreciate … how flexible my professors are,” Cherry said. “If I want to stay on Zoom for a day, that’s totally fine with them. They’re just following what our comfort levels are, and a lot of professors have been asking for feedback on what went well and what didn’t, so I’m pretty impressed with that.”

It is this type of support and flexibility that students hope carries forward as online classes continue. How the hybrid model of class will progress and evolve through the semester, though, remains to be seen. 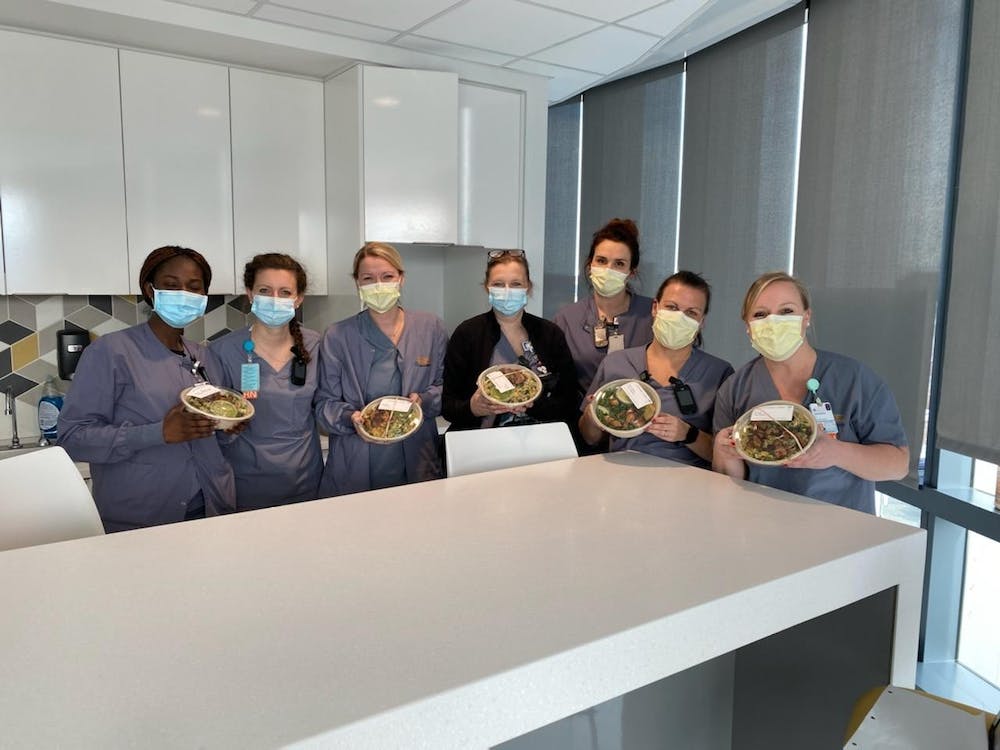 By Sally Stouffer | 16 hours ago

Two sibling alumni were moved by the difficulties faced by healthcare staff and were inspired to help them.

The testing site isn’t the most glamorous destination, but at least it’s not the desk in your room.