If you were an animal or a plant, what would you be?: Aloe vera

If you were an animal or a plant, what would you be?: Owl, an image of wisdom that never sleeps

Sade: I knew that everybody wanted us to have a non-typical date, and so my first option was Jump Cville. But he said no, because he had salsa [dancing], which is a fair reason, but we ended up deciding on baking because we both like to bake.

Jae: We just texted about how to make [our date] original. And we went down the list, like a sunrise hike or going downtown or something like that. But then she mentioned baking, and I love to bake — I'm literally baking a banana bread later on tonight. And I was thinking, you know, that's pretty fun. You can't go wrong with that, and also I looked at my fridge, and I had no groceries. So it sort of just [became] a Trader Joe's/bake date, and it was pretty fun. I picked her up from Mem because she had just got out of a class, and I had to get out of a doctor's appointment.

Sade: He was standing, and he was looking in the opposite direction waiting for me to walk up. And so I was coming from behind, which is a little weird, and then I was like, “Hi.” And then, I didn't know if I was supposed to hug him or not, so I hugged him. And he wasn't uncomfortable, but I don't think he was expecting a hug.

Jae: I think she's a hugger. She gave me a hug the minute she saw me just standing by my car picking her up from Mem. And I felt a little weird about that because I [had] literally just met her. But we had texted a lot, and that was a lot of fun.

Sade: So he picked me up after my last class, and then we drove to Trader Joe's because he wanted to go to Trader Joe's. We decided that we were going to bake sugar cookies and decorate them, and we were going to give them to you, but my friends ate them all so sorry about that. But, we went to Trader Joe's and then they didn't have any sugar cookies. But he still wanted to do his personal shopping, and I was like, “Okay, I'll do mine, too.” And so we bought our groceries, and then we [went to Kroger and] got sugar cookie dough and icing. Then we went back to my sorority house because when I asked him whether or not he wanted to go to his house or my house, I said I lived in a sorority house and we could go there if [he] wanted but it would give him a little bit [more] attention. And he said he was okay with that because he thought I wouldn't feel safe [at his apartment] because I didn't know him yet.

Jae: It just worked out conveniently. Logistics wise, we were talking about where we could make our stuff. And I was like, I could offer off my apartment, but I did not know who this person was nor even know what she looks like. So I was just like, hmm, maybe somewhere else or maybe her place. So conveniently she lives in [a sorority house], which me being a nursing student, I have a million friends in. We decided to just go bake there.

Sade: When we met in person we joked that he was kind of like a serial killer, but it was fine and he was really nice. I don't think I was intimidated. He was really good at two truths and a lie, and he kept wanting to play two truths and a lie. And I thought that I was good, but he got mine right every single time. And then his [truth], for example, was that he fended off four bears. But I don't know if that counts as a truth because he saw four bears from a distance on separate occasions, so there's a lot of technicalities.

Jae: We did a lot of two truths and a lie. We pretty much just made a game out of it the entire time. She said I was really really good at it. I was really apparently good at reading out the bulls—t of which one is actually a lie. For example, one of mine was, “I've been dancing for eight years. I learned how to ride my bike at 12. And I’ve fended off four bears on four different occasions.” I would have hard-hitting ones, and hers would be really difficult too, but I just sort of guessed [them], and we just had a really good game about it.

Sade: I know about his family history and the struggles of his grandmother, and I know his reasons for going abroad. He wants to go back to the Philippines. He asked me about the [scandal that happened with the Multicultural Student Center]. I learned so much. I learned about his camping experience, about his interests and his hobbies.

Jae: One of the topics was just the ability to speak one's mind. We talked about what happened at the MSC a few weeks ago and her thoughts about it. [We also talked about] her perspective being a white woman and also me being a person of color but a leader of people of color by starting my organization for mixed people, too. So, I think [we had] both a mix of very fun conversations — like true two truths and a lie, weird things about our families, how we coped in middle school — and also just serious things like your thoughts about what happened at something at U.Va … and what you see from that perspective.

Sade: He's super involved, and I don't know how I didn't meet him before, but we have a bunch of friends in common. All of my friends who I asked about him  — because I didn’t know him — were all like, “Oh, he's super involved.” When we were talking about things he just had a story for everything, and he really is truly in every single club on Grounds. Wildly insane. He has a dog. He just seemed like he had it all going on and all figured out. He's basically the only boy in Nursing. I'm sure there are others, but he's killing it. He just really seemed to have everything in check.

Jae: I think the biggest thing [that] was really weird is that we had a lot of the same friends that were talking to each other and to us about each other, while we never actually knew about each other … That was sort of a big thing … She was really really sweet and fun. I felt weird because she was gassing me up a little bit about how involved I am. Because I think the way that people described me to her was that like, “Jae is super super involved, but he apparently does it well,” and I'm just like, “Stop, stop it,” haha.

Sade: So we went up there [to my sorority house] and I told him earlier [that] I had to go to a dinner with my friends around six, and we got back at 5:45 [p.m] to bake these cookies. But I was like, “it's okay we're going to bake the cookies anyway.” We baked them and then I was late, but he was really nice and we ended up making them in honor of Pilot Pete, because “The Bachelor” was on that night, and we both watched “The Bachelor.”

Jae: I think we were just sitting there thinking how we were going to decorate these cookies. The way that we figured it out was just starting on the topic of “The Bachelor,” and I think since “The Bachelor” was on later that night, anyway, it just made a lot of sense. I didn't want to bring any cookies home, so I was like, “Let’s just make cookies [for the house] because [the girls are] gonna watch “The Bachelor” later anyway.” That was just a lot of fun … She had dinner plans at six. I had a study [session] at 1515, and we just split off from there and walked down the Corner.

Sade: My mom told me — this is weird — but a palm reader told her that I would meet the love of my life before the end of 2020, and his name would start with the letter P like Pilot Pete or Patrick. So I knew as soon as he said his name was Jae that it wasn't [going to] work out. But he’s really nice and cool. I think, honestly, we're both super enthusiastic, and I think that our personalities are similar … He was really really sweet and super nice and super cool. He genuinely has it all going on. Someone should date him.

Jae: She texted me the night afterwards, “I had so much fun today. I love talking about your family and your involvements and fighting off bears. I think we would make great friends, shocking we haven’t met before.” So, [I was] instantly friend zoned there, which is fine, and I responded, “Absolutely. It was great hanging out with you,” and then she hearted the message.

Sade: Blind dating was fun. My parents met on a blind date, and so I was kind of excited but, I don’t know, kind of disappointed that I didn't find the love of my life. But it's okay. But you should definitely write an article called Single Sade and I will definitely work with you on that and be devoted to that. Send me [on a date] with the rejects.

Jae: I think I just met a new friend, and I would love to hang out again. But we’re busy people. We’re third years  — it be like that.

Want to be featured in a future edition of Love Connection? Apply here! 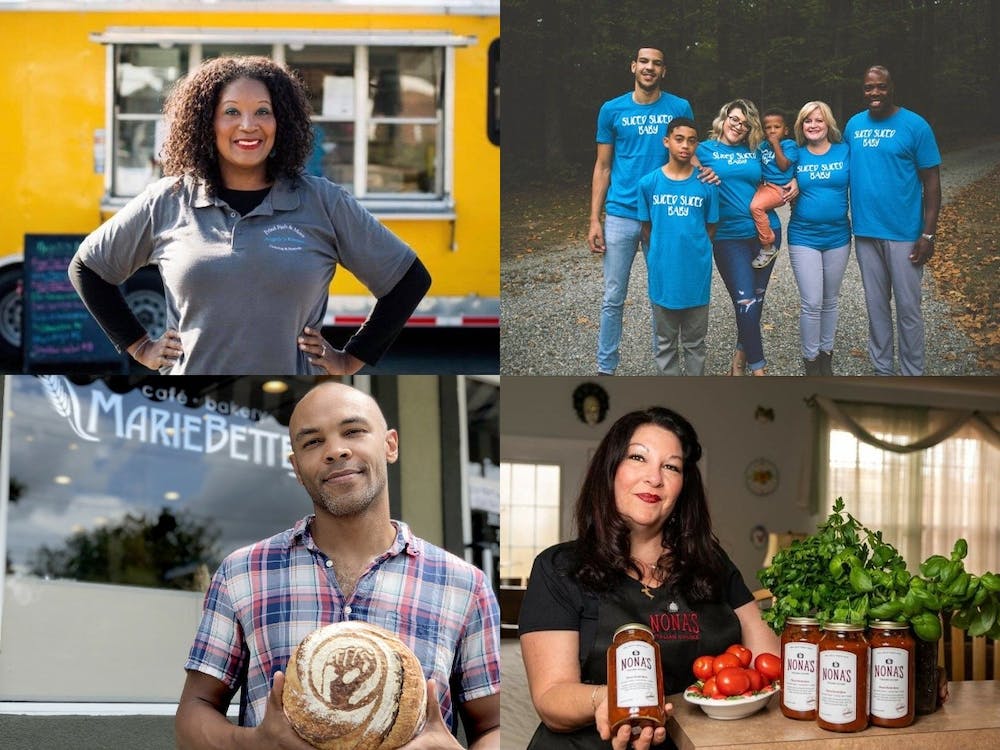