Despite efforts from the Deans Working Group, some students remain skeptical of University administration

To confront such repercussions of last year’s rallies, the University formed the Deans Working Group, made up of University deans and faculty members, not only to prevent another situation to the magnitude of Aug. 11, but also to address the structural issues within the University that initially attracted hoards of torch-bearing white supremacists. After tackling issues of University security, the group adopted a multifaceted approach to understanding community values in order to stimulate healing in the future.

“We thought about there being three pieces,” said Risa Goluboff, dean of the University Law School and chair of the Working Group. “One was about who we are as a community, who’s in our community. One was about how we live our values within our community. The final was how do we use the resources that we have – the scholarly and intellectual resources of being a university – to think about what happened, to understand it better, to prevent similar things from happening in the future.”

From its inception on Aug. 18, 2017 to its eventual conclusion this past June, the group provided recommendations to enhance on-Grounds security, examined U.Va.’s historical symbols and expanded scholarship programs for underrepresented students. Although the group was outwardly ambitious, some students criticize the Working Group for what they see as a lack of transparency.

Expansion and revaluation of on-Grounds security comprised a significant portion of the Deans Working Group’s response. Officer Ben Rexrode, community service and crime prevention coordinator for the University Police Department, said the heightened campus security was initiated with the hope of leaving students feeling physically and emotionally safer at the University.

Although Rexrode noted that extra personnel doesn’t necessarily guarantee reduced crime, he said UPD experienced a 5 percent decrease in police reports from the 2016-17 school year to the 2017-18 school year.

This expansion of police presence was compounded by other efforts from the Working Group to address campus security — the group also recommended to the University changes to security infrastructure per the suggestions of Margolis Healy & Associates, a consulting service specializing in campus security. Some of these recommendations included enhancing the University’s Emergency Management systems and consolidating campus safety and security functions into a single division. Most notably, the University created the new position of the associate vice president for safety and security, appointing Gloria Graham to fill the office.

The Working Group additionally recommended revising the existing policies that allowed an event like Aug. 11 to happen in the first place — updating the University’s “Open Burn and Open Flame” policy, classifying Grounds as a “facility” and amending the University’s time, place and manner policy for unaffiliated persons, which now mandates that anyone not enrolled or employed at the University give notice and make reservations at specific locations before speaking publicly on Grounds.

However, some students claim in particular that the unaffiliated persons policy represses free speech and student activism — further exacerbating discrepancies between the University's treatment of identified white supremacists and student activists.

For example, Caroline Mubiru, a third-year College student and member of activist group U.Va. Students United, points to the University’s hesitancy to issue a no-trespass order to white nationalist Jason Kessler upon his visits to the Law School library this past spring, whereas three student protestors were quickly arrested for trespassing after they held a banner reading “200 Years of White Supremacy” during the Bicentennial Launch Celebration last October. Some students who shared these sentiments criticized the heavy police presence employed by the University at the Aug. 11 and 12 anniversary events last month.

A concern that has been voiced by several students since the events of August 11 and 12 is the University’s lack of support for the victims. The University has attempted to address this issue financially. In September, then-University President Teresa Sullivan announced that U.Va. would allocate $12,500 from private sources to the Charlottesville Patient Support Fund, managed by the UVA Health Foundation, to pay the medical expenses of survivors. The allocation reflects a donation of $1,000 from the KKK to President Edwin Alderman in 1921 which, if inflation-adjusted to today’s dollars, equates to roughly $12,400. The University Health System and Sentara Martha Jefferson Hospital later matched this donation — contributing a total of $24,557 to the fund.

Despite this donation, members of U.Va. Students United are dissatisfied with the University’s response to rally victims. Although they have met throughout the year with members of the administration and the Deans Working Group to ask for further assistance for student survivors navigating their bills, 2018 University graduate Sophie Schectman told The Cavalier Daily ahead of this year’s Aug. 11 and 12 anniversary events that their concerns have largely fallen on deaf ears.

“[The administration hasn’t] even made an attempt to hear us out or discuss with us,” Schectman said, “It’s always been the student survivors putting in the work to get meetings with the administration and digging up our trauma again and again.”

Mubiru notes a similarly lacking reliance on student and survivor input, stating she believes many of the Working Group’s measures aim to repair the University’s image instead of the community.

Although Mubiru and Schectman lament what they saw as a lack of student engagement from the Deans Working Group, Goluboff said student and community input was a vital part of the group’s efforts. The Working Group also included a student member, then-fourth-year College student Bryanna Miller, who also served as the student member to the Board of VIsitors.

The future of the historic landscape

Brendan Nigro, a fourth-year College student, former chair of the University Guides Service and current student member on the Board of Visitors, served as one of the student members on the committee. In an email to The Cavalier Daily, Nigro said student and community input was instrumental in the formulation of the committee’s final report.

The committee submitted its final report to the Deans Working Group in February to identify certain principles to guide the future of University landscape — emphasizing the importance of identifying which additions, contextualizations, alterations and removals to make to Grounds. For example, one recommendation the group made was to celebrate more “agents of change,” or individuals who helped push the University in a more progressive direction, in the landscape. While the University has yet to initiate direct changes to its landscape since the report’s release, Nigro says that he is hopeful for the future of the University’s landscape and for a more comprehensive representation of the University’s history.

Healing in the future

Many of the initiatives set forth under the Deans Working Group address existing University infrastructure; however, the group hopes that their expansion of scholarship opportunities for underrepresented students will ensure progress moving forward.

In April, the University’s Board of Visitors allocated $5 million to the provide the Class of 2022 with 50 additional University Achievement Awards as well as to contribute to the creation of another 50 Blue Ridge Scholarships. The Board similarly allotted $20 million in strategic funds to the Bicentennial Professors Fund, which aims to attract and retain an accomplished and diverse faculty. According to Gregory Roberts, Dean of Admissions, 85 percent of the scholarship recipients — now first-year students — say that these scholarships were “really important to their decision to come to UVa.”

The Board of Visitors approved a final $5 million for a “Bridging Project,” which Goluboff describes as an effort to find creative and ambitious ways to connect students across diverse backgrounds.  So far, $1.5 million of that allotted amount has been released by the Provost to fund this initiative.

“The initial $1.5 million is a kind of pilot program and I think the idea is to get ideas running and to get examples so people can see what is possible,” Goluboff said.

Possibilities in a new presidential term

Given that the Deans Working Group operated in the midst of a presidential transition, the group left some work unfinished. However, with President Jim Ryan having assumed office last month, Goluboff hopes he can continue to look to the Working Group’s responses in his nascent presidency.

“It was in some ways unsatisfying to be working in the midst of a presidential transition because we, as a working group, couldn’t finish a lot of things,” Goluboff said, “but what we did do was finish projects that we thought could lay the groundwork for President Ryan as he asked these questions coming in fresh.”

Goluboff also said that the healing process since the events of August 2017 goes beyond the recommendations of the Working Group and University administration — the entire community has contributed to recovery both implicitly and explicitly through conversation and engagement.

“What I always think in my head is that the University’s response was so much more than the working group’s work,” Goluboff said. “People responded in so many ways that shored up the University, that questioned what we do … and productively asked how can we do better.”

By Ali Sullivan | 5 days ago

Federal regulations require on an annual basis that “rebates and discounts obtained when making these purchases must be accounted for and subtracted from claims made by a university against Federal Award funds.”

At the University, only 108 faculty members are Black — comprising just 3.7 percent of the University’s 2,920-person faculty. People of color, more broadly, make up 26 percent of tenure-track or tenured professors. 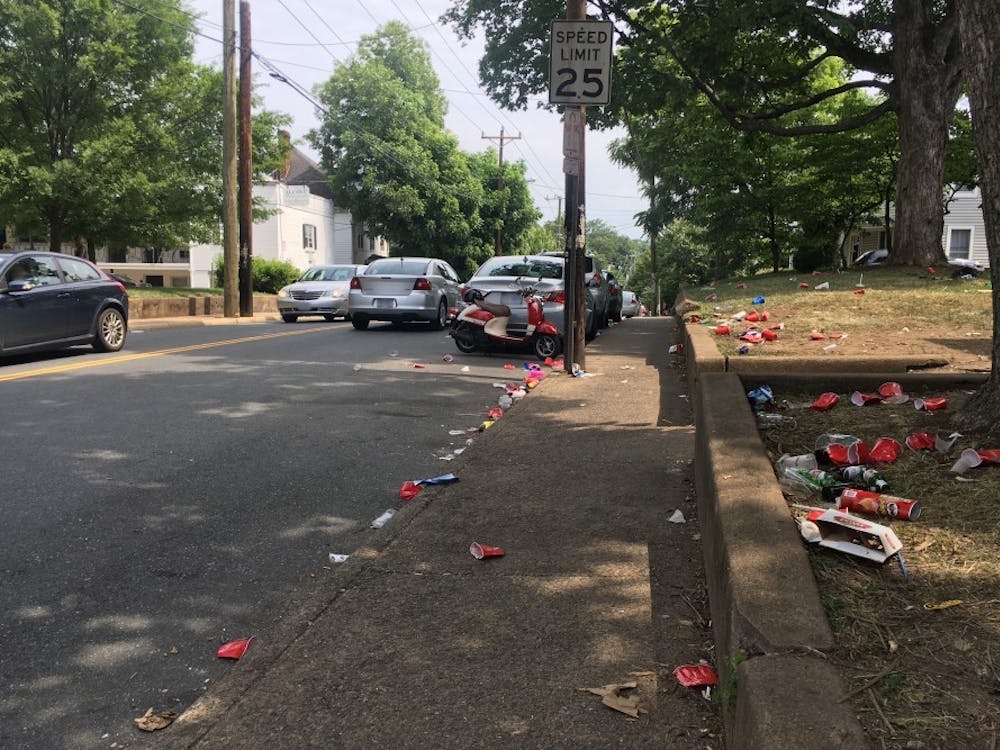 Addressed to University administration, Title IX, and the Office of Equal Opportunity and Civil Rights, the list of demands calls for “immediate, structural, and transformative change of the University of Virginia’s policies and resource allocation for sexual violence, sexual harassment, and intimate-partner violence prevention and support services.”