U.Va. Health, the Blue Ridge Health District and the state of Virginia have experienced a rise in cases, hospitalizations and deaths as the winter has progressed. So far, the University has not announced any changes to its plans for the spring semester — classes are scheduled to begin Feb. 1 and on-Grounds students will move in starting Jan. 29.

“University leaders are monitoring the progression of the virus daily,” University spokesperson Brian Coy said in an email statement to The Cavalier Daily Monday. “If there is a need to change course we’ll make an announcement between now and Friday [Jan. 15].”

Mitch Rosner, chair of the department of medicine, and Chris Holstege, director of student health and wellness, addressed the progress of the pandemic at a town hall event Tuesday night.

According to the University's COVID-19 Tracker, there are currently 153 active cases of COVID-19 within the University community. The number of hospitalized patients at U.Va. Health — now roughly 60 — has doubled since early October, when it hovered around 30. 13 individuals were admitted on both Jan. 5 and 6, marking all-time highs for hospitalizations within a single day so far.

U.Va. Health saw an increase in cases and hospitalizations following the Thanksgiving holiday, during which many Americans ignored warnings about the risks of travel and in-person gatherings. Though the hospital has been able to accommodate the number of COVID-19 hospitalizations so far, U.Va. Health has had to temporarily turn away some transfers and new admissions, as well as redeploy staff to manage its COVID-19 patient population.

These trends are not unique to Charlottesville or U.Va. Health — both the Blue Ridge Health District and the state of Virginia are experiencing increases in caseloads and hospitalizations. The Blue Ridge Health District reports 9,011 cases of COVID-19 and 392 hospitalizations, and its test positivity rate is now 10.6 percent, compared to under two percent before Thanksgiving.

The Virginia Department of Health’s dashboard reports 401,947 cases and 19,326 hospitalizations, as well as a seven-day positivity rate of 16.4 percent. Virginia’s daily case rate has increased almost five fold since Thanksgiving, and the state’s mortality rate has increased two and a half times.

As cases and hospitalizations mount, the need for increased testing has also become paramount. The University is mandating that students who return to Charlottesville after Jan. 11 come in for testing once per week and students will be assigned a specific day to report for testing beginning Feb. 1.

“We’re continuing to do community testing, as we have for the past several months, and we hope to increase community testing in the months ahead,” said Eric Swensen, public information officer for U.Va. Health.

Outside of U.Va. Health and Blue Ridge Health District community testing events, however, tests can often be difficult to access for those without a primary care provider who can refer patients to a testing site or make an appointment easily. Though places like CVS and Minute Clinic offer walk-in testing, their turnaround times can often be anywhere from five to seven days depending on capacity, while other labs — like U.Va. Health — may be able to deliver results within 24 hours. While U.Va. Health’s community testing events are convenient, they have also sometimes been overwhelmed by the need for testing.

This was the case for Associate Nursing Prof. Kathryn Laughon, who drove a community member to get tested for COVID-19 at a drive-through community testing event hosted by U.Va. Health. The event was supposed to take place from about 5 p.m. to 7 p.m. — just after Laughon arrived, however, the line of cars was cut short because there weren’t enough tests available.

“We were [there] like 30 minutes after it started, there were maybe a handful of cars behind us,” Laughon said. “We made it just before they cut it off … that’s it. That’s the community testing we have.”

Laughon said that she thinks the lack of access to community testing isn’t U.Va. Health or the Blue Ridge Health District’s faults — historically, Laughon said that public health has been understaffed and underfunded, and now their limited resources have been stretched thin by a pandemic.

“We’re 10 plus months into this and there still isn’t a community testing strategy that works, and especially one that works for the most vulnerable,” Laughon said. “The failure is at the federal and then state government levels, so what we're seeing in Charlottesville I think is representative of what's going on in communities all over the place.”

Despite the increase in cases statewide, vaccines have provided hope for the healthcare workers, faculty and nursing and medical students who have received and administered them so far.

While many of Virginia’s health districts, including Blue Ridge, are still focused on vaccinating healthcare workers and individuals in long term care, other parts of the state moved into Phase 1B of vaccine distribution this week — this phase includes frontline essential workers, people age 75 and older and people living in correctional facilities, homeless shelters or migrant labor camps. The Blue Ridge Health District is uncertain about when it will move into Phase 1B, as there are still many frontline healthcare workers who need to receive vaccinations.

So far, VDH reports that 181,316 Virginians have received at least one dose of the vaccine, while 19,086 individuals are fully vaccinated. As of Monday, U.Va. Health has administered over 10,000 vaccine doses and has the capacity to vaccinate anywhere from 900 to 1,000 individuals per day.

U.Va. Health is also eight months into developing its own vaccine, though it will be at least a year before it can be used in clinical human trials.

“The state goal was to ramp up to at least 50,000 vaccines administered per day, but this is going to take some time,” Rosner said. “In the meanwhile, we have to rely on those public health measures ...the continued use of face masks, limiting the size of congregations, maintaining social distancing [and] using good hand hygiene.”

By Jenn Brice and Eva Surovell | 2 days ago

All students who plan to learn on Grounds or live in the area must complete pre-testing before returning to Charlottesville and are required to abide by weekly prevalence testing guidelines.

By Stratton Marsh | 3 days ago

The webinar was structured into two panels. The first panel discussed domestic politics in both countries, while the second panel discussed the future of U.S.-China relations. 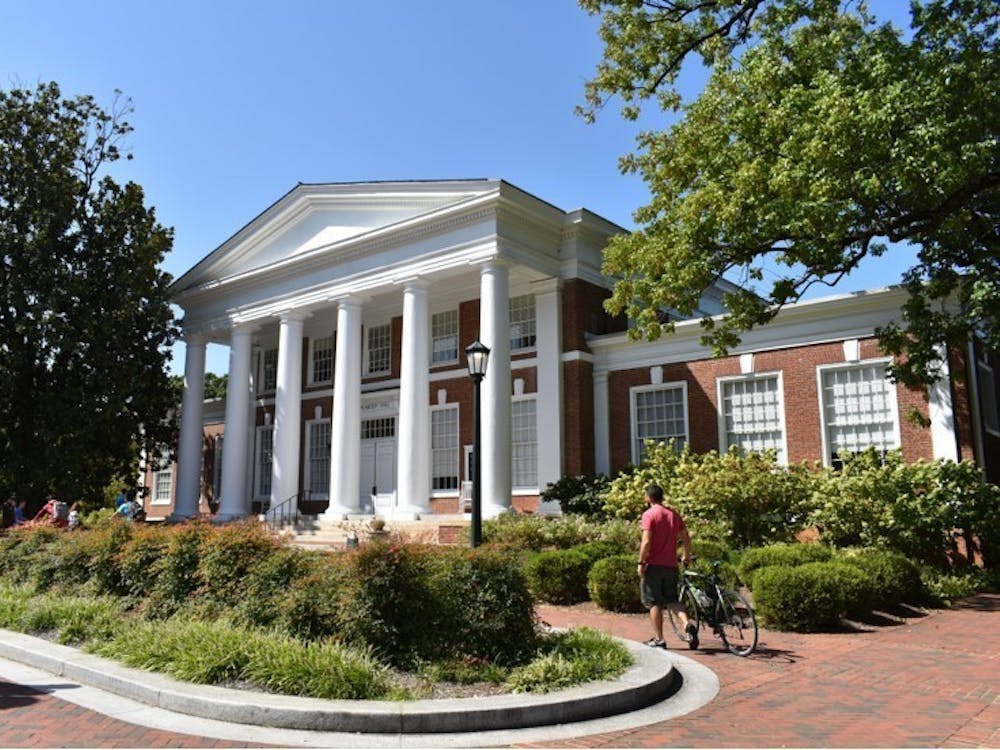 By Lauren O'Neil and Annabel Li | 3 days ago

Dean Roberts said that 42 percent of this year’s applicants opted to submit their application without the traditionally required test scores.